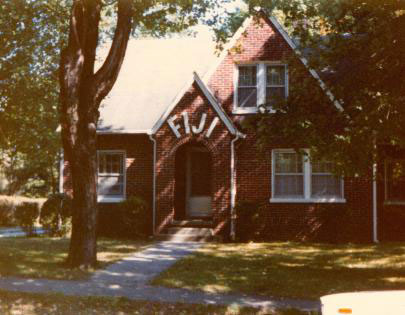 On February 28, 1981, the members of our Delta Colony were initiated, bringing to life Theta Tau Chapter of Phi Gamma Delta. Ever since, Theta Tau has been a consistently recognized fraternity chapter at Tennessee Tech. In those early years, years, FIJIs established leadership traditions that continue today, almost 40 years later. Phi Gamma Delta’s influence at Tennessee Tech has resulted in graduate brothers that go on to successful careers and who are committed to their families and communities. It is evident that our Theta Tau Chapter is truly part of the fabric of the University, and that FIJI Brothers embrace the phrase of “Not for College Days Alone.”

We are proud to report that Theta Tau is operating from a position of strength in virtually all of its operational functions.

Academics: This past Spring semester, the Chapter’s GPA was a stellar 3.05, which placed it well ahead of the all IFC average of 2.70 and ranked 1st overall among all fraternities on campus. Similar placement has become the norm over the past years. In fact, the chapter GPA has exceeded the all-campus GPA for each of the past 25 years!

Chapter Size and Quality: The Chapter is also as large as it has ever been, and is growing, with a total membership of 47 going into the Fall 2019 semester.

Campus Leadership and Community Involvement:Perhaps nothing more uniquely characterizes the undergraduate Chapter since its colonization than its involvement on campus. Our undergraduate Brothers remain leaders on campus, being well represented in class honoraries and student organizations. In Spring 2018, our Chapter won “Fraternity of the Year” for the 22nd time, prompting the University to announce that the award will not be given going forward, to the trophy now permanently resides in our house!

At the 2018 Greek Awards, FIJIs were named as best dressed, funniest, most likely to be successful, most studious, most talented, having most TTU spirit, and Mr. Greek Life. The Chapter was also recognized for Outstanding Scholastic Performance, Tony Marable was recognized as Chapter Advisor of the Year, Chase Womble was recognized as Chapter President of the Year, and Bryan Domino as Greek New Member of the Year. Impressively, Phi Gamma Delta was named as the only Five Star Chapter at TTU.

Over the past year, the chapter managed to complete a total of about 2,800 hours of community service. Through philanthropic events, we helped raise $3,400 for USO and nearly $9,750 for the Children’s Miracle Network. We placed 1st in homecoming, won most spirited group on campus, won multiple Philanthropies, and placed 1st in TTUs Children’s Hospital Philanthropy. Athletically, we placed 1st in flag football, indoor volleyball, kickball, the sand volleyball tournament, wrestling, and we won first place for the all sports campus cup.

Obtained in September of 1979 while still Delta Colony, our Chapter’s first house was located at 421 N Walnut Avenue. In August of 1985 we moved into the current house located at 527 N Peachtree Avenue, purchasing the property in 1988.  That house has served as a home-away-from-home for many young men over the years.  It was there that we learned valuable leadership lessons and forged life-long friendships that we continue to enjoy and draw support from today.

But our chapter house structure has simply come to the end of its life-expectancy. The building is 66 years old and is in need of substantial upgrades to be brought up to code and to ensure a safe living environment. After evaluating  opportunities for renovating and expanding the current structure, we have determined that there are limitations: the common areas can only accommodate less than 50% of the undergraduates at one time, there are no dedicated study spaces, minimal storage, and little separation between open and private space. 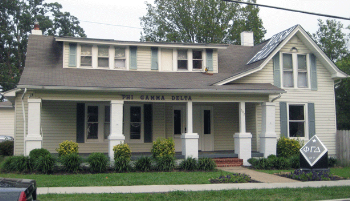 More importantly, there are safety issues – there is no sprinkler system or fire alarm system and several floor joists have cracked – the HVAC systems need significant attention, and the exterior siding needs to be replaced. Demand far exceeds capacity, as the house sleeps a maximum of 9 brothers, which is not proportional to our Chapter of almost 50 undergraduate brothers.

Other Greek organizations have faced similar challenges. If you have been on campus lately, you will have noticed extensive renovations and additions to fraternity housing, all to respond to growth in membership and to provide safe, appropriate housing for their brothers.

Finally, Tennessee Tech continues to build 21st century dormitories which feature state-of-the-art facilities that provide even greater living options for students. Faced with competition for modern rental space, and recognizing demand for better housing, private landlords are also building capacity and renovating to meet new demand. This requires us to implement long-term plans to maintain a safe,competitive housing environment for our undergraduate brothers.

With these issues in mind, Tech FIJI’s Inc. (TFI) worked with Mike McIndoe (Tenn Tech ’84), a well-respected site engineer, to consider our options. With his professional support, TFI, in conjunction with the Board of Chapter Advisors and the undergraduate Chapter, has concluded that to provide safe housing for our Brothers and to remain competitive with other Greek and campus housing options the most desirable alternative would be to start fresh and build a new home on the existing footprint.